First off, fellow Nanodoers, go and write that novel and stop procrastinating!

So, before we start off this months wishlist, lets see how last months went, shall we?

There were also a few extra things that happened this month. First off, I started a new job. It’s much better than my last one, but still, it’s not great. Secondly, my hamster, Mouse, had his operation, and he came out better than ever! And, something that wasn’t planned, at all, included my dad trying to cut off his own hand. He had to spend two nights in hospital because of it, and hopefully, he might be a bit more careful the next time he uses a circular saw thing!

As I said towards the top, I also managed to read like six books, plus beta read one fairy tale retelling – Melody by Penny Kearney – and the beginning of an epic fantasy. Both of them felt like a privileged to read, and they need to be on your TBR lists once their out in the world! I’ll be sure to let you guys know all about them when the time comes!

The published books I read included Secret of Souls by Aubrie Nixon, The Fault in Our Stars by John Green, Traitors Blade by Sebastien de Castell, Mike Thomas’ Ash and Bones, Leigh Bardurgo Six of Crows and Michael Morpurgo’s Listen to the Moon! A load of reviews to come!

I spent some of the month also prepping myself for NaNoWriMo, and I am so excited to write this novel, I really hope it keeps the motivation and the inspiration there for me to get to the end!

This also means though, that this month, I want to dedicate all of my writing efforts to Nanowrimo, and that means I need to put ‘Tales of Monsters’ to bed for the month. I have to say goodbye to one, and hello to another, and even though it’s not goodbye forever, it feels like I’m losing a limb or something. But, if I don’t do it, my Nanowirmo project won’t get what it needs, and I think it’ll be good to have a break between this draft of ‘TOM’ and the next! I honestly learned that there’s no point in me rushing it, it’s a big world and it needs to be right, and I also need to get it ready enough for beta readers, so, if you’re looking for a medieval type fantasy with some monsters in it, watch this space!

Another reason for this is that my NaNoWriMo project started off as something quite simple. But, lately, it’s started to grow even more inside of my mind, the contrasts and the comparisons that link in with my two main characters are getting intense, and quite deep, and I only hope that it works out the way it is in my head! There’s no real end goal, not really. A child is in no way going to find the cure to a zombie apocalypse, and neither is they guy who found her diary, but maybe they can find themselves at the end of it, or perhaps Al decides he wants to find this little girl whose diary he’s reading; but, if she doesn’t have her diary anymore, does he really? Or, maybe, in true zombie fashion, they both die at the end.

However, if anything, I really hope that the children in this book show the adults how it’s done! Mel is a strong little thing, despite being eleven years old, and I’m hoping that the innocence of a child will show all the downfalls that adults go through in times of peril!

So, my goals for this month include:

So, here’s to November, to the month of fall, to the day the Zombie apocalypse begins and to all the others out there attempting the NaNoWriMo challenge

These are the challenges I’m taking part in! I know it seems like a lot, but it means I can connect with more writers and fellow NaNoDoers! 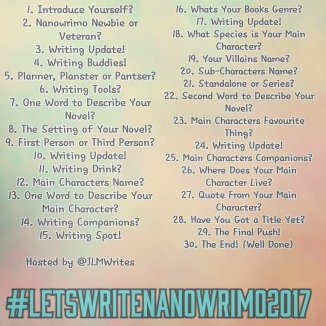 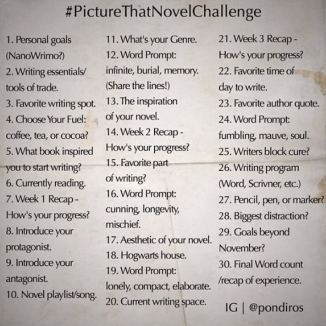 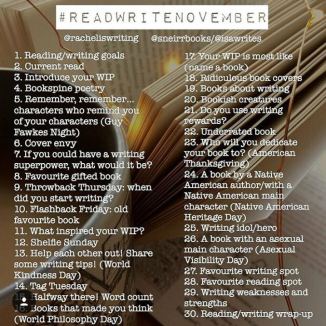 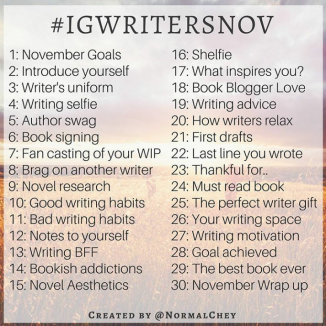 Just keep writing is the best advice I can give to some of you this month! And, keep trucking on and completing all the goals you set yourself!

I like to write and stuff View all posts by JLM