Friday post alert! I wonder how long I’ll keep them up for!

So, Im gonna take you back to my last blog post of 2016, where I decided that I was going to take up what’s known as a happiness jar.

Essentially, it’s a container in which you put small notes in that have something that made you happy written on it! Easy peasy!

Now, I wanted to put a note in every day, but, I slacked most of the time and probably missed out a load. But, still, it got about three quarters full!

My converted glass jar started off it’s life with curry inside of it – which took far too much time to get the smell out of. At first, it was top less – the top still smells of curry even now, but, in the later months, it was topped with some paper from a sweet bag from my friends wedding, with a little slit on the top so notes could get in, but they couldn’t get out.

One of the earliest memories that I remember I put in to it, was seeing African wild dog puppies at YWP in February (and polar bears too, which was awesome)! Its been on my bucket list since I first saw them for real at Chester zoo in my first year of uni.

And now, Chester Zoo have just had a litter of puppies been born too! Which is amazing and means I have a reason (although you never need a reason to go visit Chester) to go back and see the zoo! I haven’t been to Chester for like two years!

The next big memory (and extreme moment of happiness) was becoming a member of the BookBoxClub! I joined during May, meaning I got the Wizards at War box, and so far, it’s still my favourite! It introduced me to one of my new favourite authors, and a new world of books I’m in love with!

Also, last year, I added a couple more to the fur family, which made me extremely happy!

First off, in May (after constructing a new hamster cage out of an old set of drawers that was just gonna go to waste), I adopted Dewi, the roborwoski hamster! I couldn’t have an empty cage, and I’d seen this poor little one sat in a tank for about three weeks, waiting for a home, and I couldn’t let him stay there any longer! It was surprising how easy it took to convince my dad too!

The second fur child was one hell of a surprise, we knew before-hand that we were going to get him, but, until we knew that was a possibility, we’d convinced ourselves that we wouldn’t get another dog until our older one left, but, low and behold, around about June time, we heard of some not-yet-born little monsters, and, on August the 28th, we picked up Albert and took him home with us 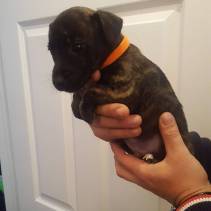 Now, he’s almost six months old and continues to put a smile on my face everyday, so, if anything, he’s like a little happiness jar in himself.

The next big thing that happened last year, and needed a place in my happiness jar, was that one of my university friends got married on August 27th! And it was beautiful! They really are meant to be together, and the day was perfect! It was also awesome to reconnect and see everyone, especially as I hadn’t seen some since the November before, and, I realised, even more, that the best king of friendships are the ones that you can go back to at a moments notice, and it’s as if you’ve never been away.

Another thing, which sort of did deserve a place in my happiness jar, considering the outcome, was that, in October, in among a new job and all those things, my Russian dwarf hamster, Mouse (who had the benefit of moving in to that DIY cage me and my dad made) had an operation to remove an unsightly tumor from his ear, and although, it could have gone either way, he came out of it perfectly and recovered really well! (Then, he got a second lump on his stomach, but, it’s stayed relatively the same size since it came up and, so far, he’s still going strong!) We also celebrated his first pretend birthday/gotcha day!

Another thing, which made me happy, but also a bit sad at the same time, was that I submitted ‘Tales of Monsters’ to agents! A bit prematurely perhaps, which meant I had three rejections (and some other no-shows). But still, I found the confidence to show complete strangers my work, which, I think, is most certainly enough!

I also bought a load of amazing books this year! And, I read some amazing books this year too! Some of the ones that really stood out were, obviously, Spellslinger by Sebastien de Castell (thank you BookBoxClub), HON’s Loved by P.C and Kristin Cast (because I can’t not read about the nerd herd), Wonder by R.J. Palacio which I’m so surprised I hadn’t picked up sooner, A Monster Calls, Six of Crows, Secret of Souls, One of us is lying, Traitors Blade, Shadowblack, 13 Reasons Why, Taste of Darkness… I could keep going, but I won’t.

Also, something huge that happened last year for me, was that I actually completed my first NaNoWriMo! I could of burst with happiness! I finished early too (19th) and I managed to write the first draft of a story I’ve been wanting to write for, forever!

I also learned the importance of deadlines, and because of that deadline, Mel and Als story is now out of my head, and has made room for even more. One of which I believe will by my next NaNoWriMo project if nothing else comes up!

Another big thing last year, and another first, that I got also got to beta read! The first was Melody by Penny Kearney, the second was the first 20k of A Whisper in the Wind by E.M. Redshaw , and the third was Hayley Soon by Andrew Henley! Melody and Hayley Soon are both scheduled for publication this year, and I can’t wait for you guys to read them!

And, to top 2017 off, I also got tickets to see both Ed Sheeran and Fall out Boy this year and I can’t wait, I’m so excited, it’s unreal!

There’s obviously so many more in that jar, but, if I wrote them all down, this post would never end!

I guess, this is sort of my personal run-down of 2017, and, considering the jar came from a blog post I found somewhere on the internet, I think it’s only right that I tell you guys how good it feels that you have something like that in your life! And, it’s so easy to put together that you can use almost anything to store them in! You don’t need a jar, you could have a tupperware box, or even a plastic bag if you’re desperate! This year, I have another jar, but that’s only because my family likes an easy curry every now and then!

But, still, I hope you enjoyed reading this!

So, until next time!

I like to write and stuff View all posts by JLM

One thought on “The First Year Of My Happiness Jar”