So, it may not have been the blizzard all of us (okay, maybe just me) were hoping for, but, it gave most people down here in the south of wales a nice blanket of snow which meant that we had the day off work and a well-earned Snow day! 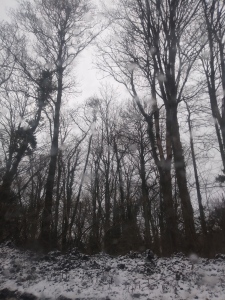 And, whether you’re the adventuring type, or the the sit by the fire type, I think the snow and the pure whiteness of it can bring the good out of anyone!

Especially us creatives! Whether you go out searching for inspiration (alone or with four-legged friends) or spend the day couped up in bed with a hot drink and a notebook, you can find just as much inspiration looking out a window as you can exploring on the ground!

Me, I’m one of those adventurer types, and, so you don’t have too, I explored some woods near my house, fell over atleast twice and will probably get a cold by the end of the week!

But, I have here some photo’s that might just fit right in to a setting or a story you’ve been working on!

So, with a miniture beast who could be quite photogenic when he stopped still, I bring you some snowy images taken by me on a crappy phone as the darkness crept up on us!

This here is the start of the hill I had to walk up, and the second is part of the snow drift right next to said wall I used as cover as a cloud of snow tried to wrap itself around me!

Then, me and the pup (because the Springer could not deal with going out in the snow twice in one day) decided to head up the lanes, only to get side-tracked by a path in to the woods that surrounded us on each side!

At a certain part in my current WIP ‘Tales of Monsters’ a bunch of my characters are searching through the woods – for what, you’ll find out if you ever read it – and the winter snow has come to visit, and this, is how I envision it! There are evergreen tree’s placed here and there, but mostly, the shrubbery is bare and naked and everything is on show!

From the photo’s, you can see that as the light changed and it got darker, how the world turned that bit more blue! 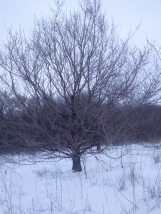 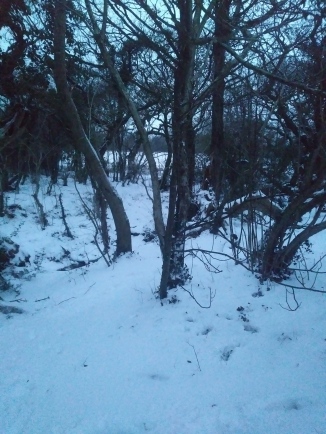 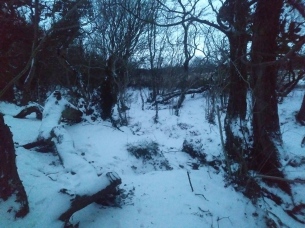 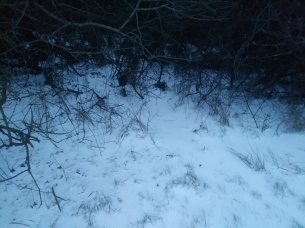 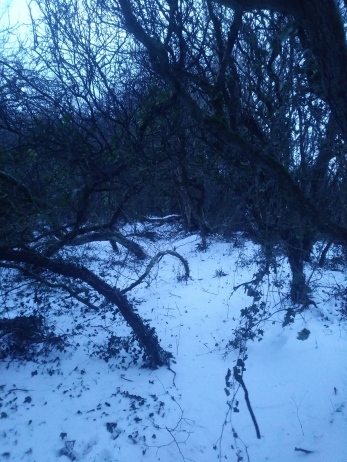 And, just to add a bit more, here are some photo’s I took whilst on my way down a country lane the day after the blizzard hit! The snow was starting to retreat already, melting from the heat of the dragon (and all that stuff), but it was still pretty and white! And you could slip on your ass just as easy as before!

And here are some of the illusive beast when he finally stops still! 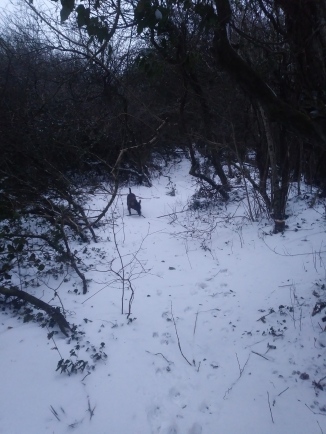