This is dedicated to all the lovely greys and lurchers who already have homes and the ones still looking for their sofa!

Greyhounds, nowadays, are generally bred for the racing industry, although some are still used in coursing, howevee, lurchers are taking on that role more and more now. 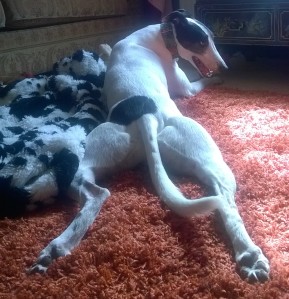 Greyhound racing was tried on a straight track in England, in 1876, but it never caught on, but then it was re-tried by an American in 1912 on a curved track leading to the first greyhound racing stadium opened in 1919.

These dogs are bred to be fast, and despite their appearance, healthy. Their long gangley legs do mean that leg injuries can occur, but they don’t usually suffer from all the problems that most other pedigree dogs do.

The only problem with a greyhound is that their not very good at sitting, and do prefer to lounge about.

They are also one of the breeds of dog that can be traced back to 3000, B.C. The Egyptians loved them and they are often found in scriptures with ridiculously large ears and pointed noses. They were closely related to the Jackal God, Anubis and were said to pass over in to an afterlife known as the Field of Reeds and therefor live forever! Cleopatra and Tutankhamen were even said to have owned one.

In Roman mythology, Diana, the goddess of wildlife is regularly depicted with a greyhound and is said to have used them as a hunting partner as well as for companionship.

In the middle ages, only the nobles were able to own Greyhounds, and they were in such decline that if you were responsible for ones death, you’d be executed!

I think the history of the breed just proves how these lovely dogs can take you by the hand and leave a paw print on your heart. 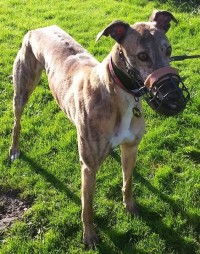 I still remember the day when I met my first Greyhound up close and personal. I was in the pet shop with my friend and her boyfriend, and we were buying goldfish for our uni house (RIP Platty). There was a volunteer from the ‘Retired Greyhound Trust’ and a lovely brindle boy called Kev!

Kev (who got renamed Charlie down the road) was the one to start off a love-affair I don’t think will ever end.

It started off with me and a couple friends walking some lovely retired greyhounds for the RGT maybe once or twice a week, but when they moved over to new kennels, we met even more, along with some lovely lurchers.

From here on, Delamere Forest became our second home and Shropshire and Borders Greyhound Rescue, Erin Hounds, Whippet Rescue UK, Lancashire & Belle Vue RGT and finally, the Mr. Cedric Trust are the rescues that I was lucky to volunteer with. 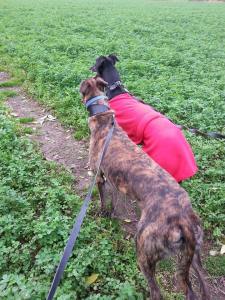 After volunteering for a while, I got to work at the kennels a few days a week. It meant that I got to know the dogs in a different sort of way, and fell even more in love.

Every one of them have their own personality and some have their problems, but each of them have something about them that make them special, and so deserving of a home.

There were some especially that took a piece of my heart with them. The first was a brindle boy called Dave. He had his quirks and his problems, but he was always lovely to walk and one of my first favourites. He went in to foster and was so good, his foster mom decided that she couldn’t let him go.

The next would be another brindle, but this was a girl named Whisper. The sweetest 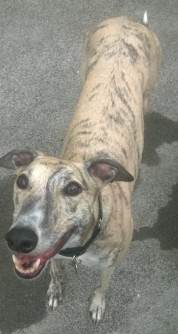 girl you will ever meet. She has everything going for her, from the way she looks to the way she looks at you. She is absolutely perfect in every way, except for that she suffers from epilepsy. Without a doubt, if she didn’t, she would have been in her forever home in no time. No one would be able to resist her.

But due to the seizures, it meant that she was put on various medication and despite her being her, it put people off. It meant that she had to wait a bit longer to find the type of people she needed, but it turned out, she’d known them from the very beginning. Two of the volunteers that came every week to walk Whisper and the other Mr.C dogs turned out to be the perfect long-term foster parents for the beautiful girl, and is now enjoying her life with a new brother.

Whilst at the kennels, a whole litter of lurcher puppies graced us with their presence. Six boys and a lovely little girl. They were always full of mischief, and not surprisingly went quite quickly. In the end, we had three lovely boys left. Dylan, Monty and Oscar. Dylan was a lovely, cheeky little puppy with a white tip on his tail, Monty was the loving baby of the group and Oscar was the clown. The one that everyone was sure would go first.

They all went off to lovely homes, Dylan with one of the volunteers sister, Monty to a mansion and finally, Oscar to a lovely couple who were ready to take on our beautifully lazy, but a little monstrous eight month old lurcher pup.

Another dog that pulled on my heart strings was a beautiful blue brindle called Mac. He
has more than a few flaws, but he gets better every day. He’s such a lovely boy, and one of the dogs that is still waiting for his forever home.

He still needs some work, but he will be the best dog for the right person. If I didn’t have my own, or if I was sure my dogs would get on with him, I would have taken him myself!

I may have had to fight a certain couple of volunteers for him though. But can you blame them?

There was also another little dog that I had the pleasure to meet and help ready for a home of her own. It only took six weeks for the excited little puppy to find a home, but I fell in love with her the moment she walked down the path, and the adventures we had, whether it was exploring Delamere forest or walking an hour to the post box were times I’ll never forget. Lovely, beautiful Tilly-Mint now has her own leather sofa to lie on and a holiday home with a lovely couple who fell in love with her at first sight! 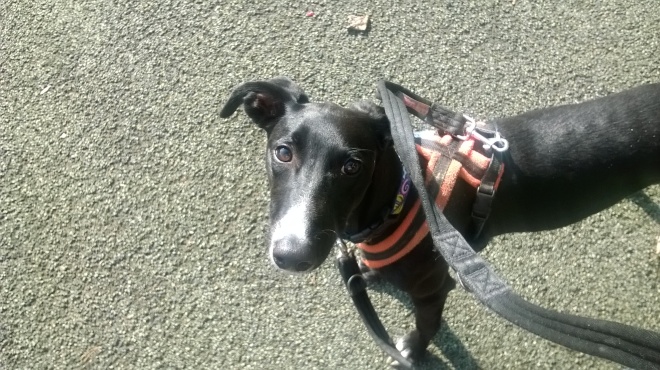 These guys, as well as so many more found themselves in rescue kennels through no fault of their own. Some were ex-racers, others coursers and some family pets that found themselves with no place to go.
There are loads all over the world waiting to find their own home, and can make the perfect family pet! 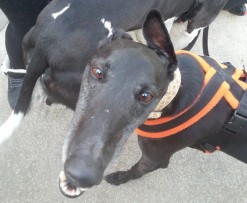 April is a great month to adopt or foster a greyhound, and if you can’t do that, donating or volunteering for your local charity will be just as good.

Here are a couple of communities (UK based) looking to rehome these lovely hounds! There’s definitely one out there to suit every family! A quick type in to google will find you a greyhound or lurcher rescue near you. 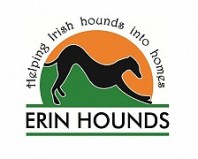