I wasn’t sure about this book. As much as I love House of Night, despite all the stereotypical and cringe worthy ‘bullpoopie’, I was worried they wouldn’t be able to do anything more than what they’ve already done. Twelve books following the same group of people is a lot, and you could argue the fact that they dragged it out a bit.

When I first heard about it, I thought it would perhaps be a book about Nyx and the overworld, but all I had then was a title without a synopsis (which I obviously didn’t look at right, because ‘otherworld’ and ‘overworld’ are two different things).

Then, a bit more about the story came out, and I realised it followed on Zoey’s adventure, and the sort-of aftermath of the final House of Night books. I honestly thought it would be this same old-same old thing. That I would continue to read anyway because it’s just nostalgic, and teenage me was in love with it.

But, they did bring something different, they brought this whole new thing that I only understood towards the end of it.

And man, guys, I had all the feels again.

It’s Zoey’s eighteenth birthmas and the Nerd Herd has been scattered across the country busily adulting for almost a year when Stark calls them back to Tulsa to surprise Z. But all is not well in T-town. Strange, dark signs are appearing—could it be possible Neferet is stirring? Not willing to chance disaster striking again, Zoey calls on her newly reunited friends to circle with her and add a layer of protection over Neferet’s grotto jail. Easy-peasy, right?

Wrong. Nothing at the House of Night is ever as it seems.

With rabid red vampyres closing in, Zoey and the Nerd Herd must come together again and battle evil. But a year is a long time. Have these old friends grown too far apart?

When the world fractures and allies become enemies, will darkness devour friendships or will light save those she’s loved?

It’s Zoey’s eighteenth birthmas and the Nerd Herd has been scattered across the country busily adulting for almost a year when Stark calls them back to Tulsa to surprise Z. But all is not well in T-town. Strange, dark signs are appearing—could it be possible Neferet is stirring? Not willing to chance disaster striking again, Zoey calls on her newly reunited friends to circle with her and add a layer of protection over Neferet’s grotto jail. Easy-peasy, right?

Wrong. Nothing at the House of Night is ever as it seems.

With rabid red vampyres closing in, Zoey and the Nerd Herd must come together again and battle evil. But a year is a long time. Have these old friends grown too far apart?

When the world fractures and allies become enemies, will darkness devour friendships or will light save those she’s loved? 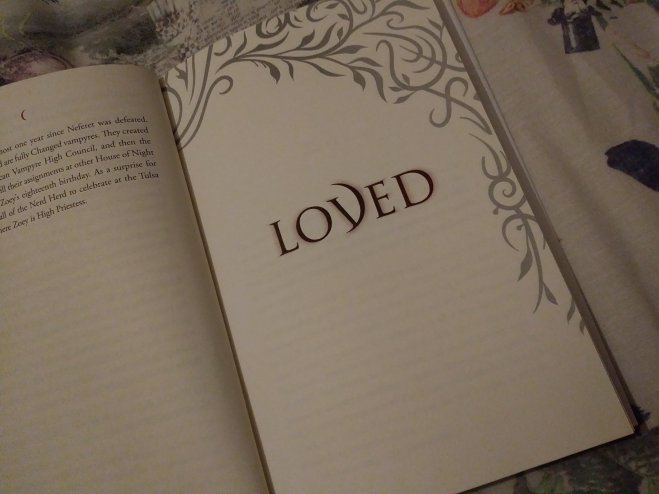 There are still things that irked me though. The language is childish, really childish sometimes, especially for what is supposed to be eighteen year old’s and it sort of doesn’t appeal to me as much as it did. I felt the same in the last book of HON, but I still read it anyway (I even put it off for the longest of times because I didn’t want the ourney to end). It’s almost feels like it borders on middle grade as well, when it’s supposed to be a YA book. What still makes me cringe is the fact that these adults don’t swear and say bullpoopie instead, except for Aphrodite…

And there was some things in it that just felt too easy, you know. I felt like a certain person shouldn’t have got off as easy as they did, but I’m trying to stay spoiler free for this part so I won’t say who. Lets just say that sometimes, you can be too merciful. 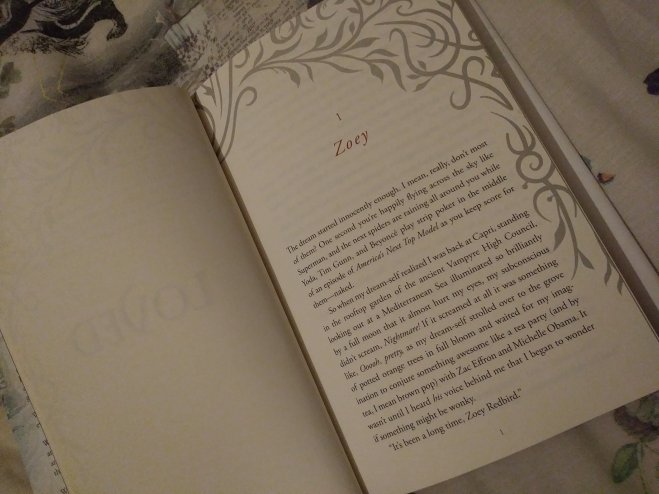 And, another thing I only noticed in this book was that sometimes, it almost felt like one of those scripted reality TV shows you see all the time, but, again, that’s more because of the language and the words they say. There were parts where the characters were like, ‘oh, this person went here because of this and I’m here’, and it just sounded too much like a bad tv show.

Despite that though, I enjoyed reading it. I finished it within two days, with work and all sorts in between, and it was so nice to be back in that world, even if some of it does seem a bit far-fetched sometimes; the joys of fantasy though, right?

All in all, despite my lists of negatives, and the more in depth reasons to follow in the spoiler part of this post – cause I need to vent somehow – it’s a good follow on, it’s P.C and Kristin to a tee, and they do it again and again, and is just the first book of this new series, which I am really excited about! And I can’t wait to read the next one! Which has been titled Lost and is already up for pre-order on Amazon!

All they need to do now is make sure it publishable in the UK so it doesn’t take so long to get to me!

Now in to the detail, all the irks and the problems that peed me the hell off.

Perhaps if you don’t want spoilers, you shouldn’t read this…

Now, if you’ve read it, I would love to know how you feel about the following, or of if you don’t care to read it, tell me if you think it should be more violent, or realistic… I guess.

So, other than a handful of red fledglings and a load of humans, none of which we really have any sort of connection with as a reader, no one dies, you know. And they even brought a very much dead Jack back to life, but obviously, it’s not thee Jack, but a different Jack, so perhaps it’s okay? I don’t know.

But, I felt like, the synopsis sort of said about this whole thing that was gonna happen, how a year might have been too long for the nerd herd to band together and be one, but there wasn’t much of any conflict between them that really stood out, nothing as drastic as I expected. Except for Aphrodite getting drunk, and Damien having a breakdown.

Also, the whole Aphrodite thing, the whole giving a piece of her humanity to someone without it. It’s believable, but the fact that Nyx just gives it to Jack and those other red fledglings and vampyres without Aphrodite losing any of hers, I felt was a bit of a cop-out. I feel like Aphrodite should have at least given one of them their humanity back herself. Perhaps, it’s all needed for the books to come, perhaps she’ll have a whole house of night to give her humanity too once it all ends. We’ll have to wait and see. And, I think she should die at the end of it too, not just die a human, or lose herself (I don’t know why I want more people to die, I just do. I’m in that bit of my own writing journey where I feel like I need to kill people off…)

And that whole Damien and depression thing that’s looked at. How did we not know about it before? How did it skip over all them books? Or did I miss something? Damien was always this strong gay guy, and not the depressed and sad one we saw throughout this book.

And I love Jack, but Jack should stay dead… And I really felt like he might have killed Duchess at one point too. I think that would have caused a bit of interesting conflict.

Although, I think I watch too much Game of Thrones and I think more people should die. Like, give me a significant death at least once a book.

And finally, this whole Heath thing. I almost thought that last bit was setting us up to follow Kevin on his journey in to the otherworld, and just have Zoey and the nerd herd be like the extra’s, maybe showing up every now and then when they send reds over to them. I’m not disappointed that their going to be playing a bigger role than I thought, I love them all, but I thought they could explore so much more with Kevin as the main protagonist, and his gang.

And, actually, if the world is the same on both sides, with the same vampyres and fledglings, how on earth is Kevin not a vampyre in Zoeys world? Did they explain that and I completely missed it?

If you’ve read it, I would love to hear your opinions on it, and whether or not you’re going to read the second book, either because you want to or for old-times sake!

And, if you’re a fellow writer, and you made it through all this ranting, do you think killing characters is an important part of writing a novel?